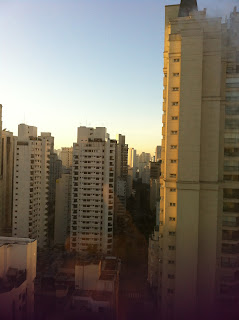 As it has been a while since I last competed, I thought fighting in the CBJJE Mundials in São Paulo would be a great warm up for the Rio Open the following week. When I signed up I thought I was going together with a group of people from the academy, turned out they were going on different days to me and as I didn't want to go on my own I arranged to stay at another student's house in São Paulo where all the rest of the team would be staying.

After preventing another monkey invasion of our room I was sent off on the Friday by most of the house giving an excellent imitation of a cheering Brazilian crowd at a BJJ comp (their portuguese is actually pretty good). It was after leaving the house that things started to go wrong and didn't stop until I got back to Rio..

It started with the taxi in Rio taking me to the wrong airport, (TAM changed my flights so it wasn't a real problem). Then the taxi in São Paulo took me on the gringo tour before I eventually got to the comp where I was suppose to meet everyone and go to the house. After wandering around for over 3 hours without seeing anyone at all I knew, and not even anyone with my team's t-shirt or patch I was a little freaked out and with no internet connection I had noway of contacting anyone either. I considered just sleeping at the competition as I remember it went on all night last time but decided that being kicked out in the early hours of the morning would be more dangerous than leaving right away. I remembered the name of a hotel I had seen on the Competition's website so caught a taxi and asked to go to the Formula 1 hotel. The driver informed me that there were several hotels with that name and although I asked him to go to the closest one (which he understood despite my terrible portuguese) he wouldn't go anywhere without the full name and kept asking me for a card from the hotel. Finally I remembered that there was the word Gardens in there and he decided he knew which hotel it was and he took me there. When I got to the hotel they told me it was full, I asked if there was another cheap hotel nearby but they wouldn't recommend one. I had well and truly had enough by this point and decided that the safest place would be to stay in the hotel lobby for the night. I told them I would wait to see if there was a cancellation & once they realised the crazy gringa really wasn't moving, a room miraculously became free.

I was very overweight when I flew out to Brasil after a combination of injuries, work and being damn lazy with my diet as I hadn't competed for so long. But I'd carefully worked on that since I've got here and After cutting the last bit of weight in my hotel room I went to the comp feeling pretty nervous but very excited to fight. I got there just before my division started after another little gringo tour of the city. I watched the previous girls fights and although I felt really nervous I also felt unexpectedly confident. Then I stepped on the scale.. My mouth literally dropped open when I saw that there was a 1.1kg difference to the scale I had been using and I was way overweight. And that was it, my first ever DQ in over 50 competitions with the absolutes being the day before I couldn't even try to get in to that.
An incredibly stupid rookie error  means I made a small division even smaller by not making weight, something which I've always had a pretty low opinion of other people who have done that. After a quick look around the comp and still not seeing anyone I knew I headed back to the hotel for the rest of the trip. 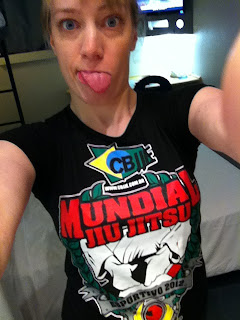 On the plus side I had faced, albeit unwillingly one of my biggest fears (being lost on my own without speaking the language) and came out just fine. I also now have a few days warning to try and not get DQed again for the Rio Open...
Posted by Unknown at 03:51