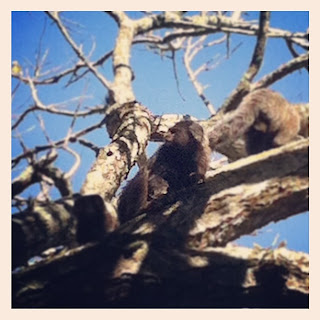 I was chilling out in the lounge one afternoon with my housemates, when a family of monkeys decided to pay us a visit in our front garden. Apparently they are seen as a pain because they will actually go as far as stealing food from the kitchen, but as this was my first time seeing monkeys in the wild I'm still at the stage where I think they are incredibly cute. I was also surprised they will actually let you get pretty close! Gotta beat pigeons in the garden which is all I'd get in London! 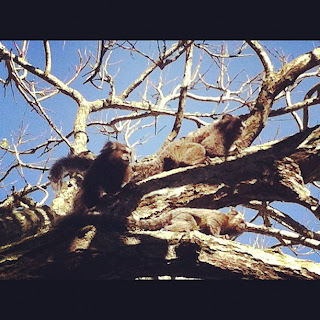 The other wildlife to regularly visit the house which is somewhat less cute are Mosquitoes. Despite having a plugin repellent, liberally covering myself with mosquito spray & taking antihistamine tablets my legs have been bitten to pieces. To make things worse I appear to have developed an allergy which meant my foot an ankle swelled to the point I had to stop training for a day and a half. As every day of training is really precious for me as I'm very conscious of the limited amount of time I've got here, this was incredibly frustrating. Both Dennis from Connection Rio and the team at Fightzone were incredibly supportive helping me to look for a doctor & giving various advice. In the end I got a cream called Fenadine from the pharmacy which is a type of antihistamine which brought the swelling down (Thanks Carol!) Thankfully Mosquito nets are going to be installed in all the rooms next week, can't wait!

I made the most of my time off training by getting my entry in for the CBJJE Mundials and the Rio Open and Master's & Seniors. The IBJJF comps were fairly straightforward to enter once I had printed off my membership form, got Ricardo to sign it and sent some scans to the IBJJF, then once the IBJJF sent my membership number (which they did within a few hours) it was just a simple case of entering online. They also replied to my emails within a couple of hours. CBJJE was another matter altogether, they did not reply to my emails at all (I sent both English and Portuguese) and despite being called a Mundial (world) championship only Brasilians could enter online (you needed what I think is the Brasilian equivalent of your N.I. number). Gringos have to enter through a complicated system of bank transfers (only through brasilian banks), faxes and phone calls which I eventually gave up on. Luckily Jack who works at Fightzone kindly did my entry for me. I'm really looking forward to competing again as I haven't fought since October due to injuries etc.
Posted by Unknown at 21:52