When you think of Brasil you think of beautiful hot sunny days in a way England could never do but then there are no half measures with Rio's weather so like they can do hot, they can also do storms unlike anything I have experienced in England....

I've learnt that a weather forecast means nothing here so while my computer was saying a little cloudy on Thursday Evening outside it was actually throwing it down with the intensity of a powerful hosepipe from the heavens, make that a warm hosepipe as the rain here is not cold like England but alot more forceful. After  a quick scramble to get all of our Gis in, we settled down in the lounge on the internet. Not long after the wind started to really pick up and the electricity started to flicker on and off..

Eventually the electricity went out for good and we went out on the balcony of the common room to see if it was just our house or the whole area (It had stopped raining at this point) There was something kind of wild and beautiful standing on that balcony looking over a darkened Barra with the wind whipping around us, I think it is something you had to experience yourself as it is a little difficult to describe in words but I can now understand why some people chase storms.

As there was not too much food in the house we decided to go to Canto's, a local restaurant which was on a different power grid so was unaffected by the blackout. After much scrabbling around to get ready by the light of phones and 1 torch (It helps to have a 14 yr old kid in the house) we set out along the blackened streets. We strolled along chatting about the storm and how quickly your eyes adjust to the total blackness not really paying too much attention to the street around us, until a large branch dropped onto a car right next to us!
Suddenly our stroll didn't seem like such a great idea but we carried on regardless more subdued and carefully watching the many trees which lined the road. Later on in our walk we saw more evidence of storm damage and I can only hope nobody got seriously hurt. 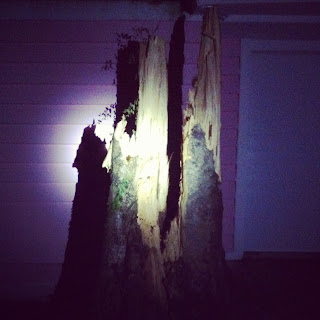 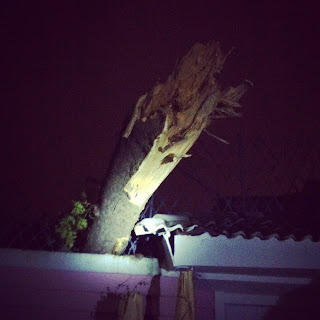 And the top of the tree

Canto's was fairly uneventful apart from the odd flicker in the electricity and the walk home similarly so.

The end of the week ment no training for me as I'd come down with the bug everyone else had got in the house. I'm hoping to get well soon and be ready to compete in the CBJJE Mundials in Sao Paulo next weekend.
Posted by Unknown at 15:23